I recently did a facebook live on how to make a needle felt fairy and thought it would be lovely to share here too. 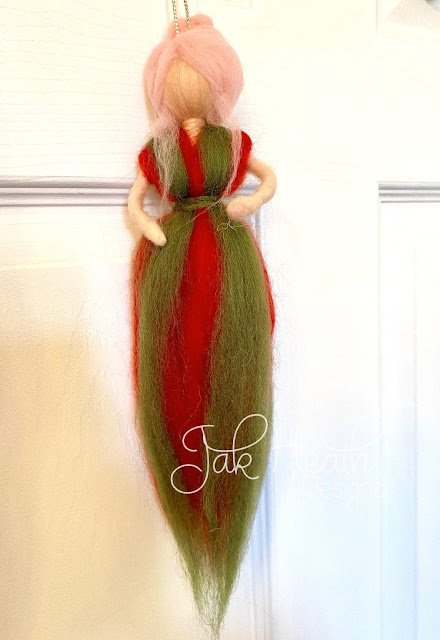 Perfect for anyone wanting to try their hand at this craft and perfect for gift giving. 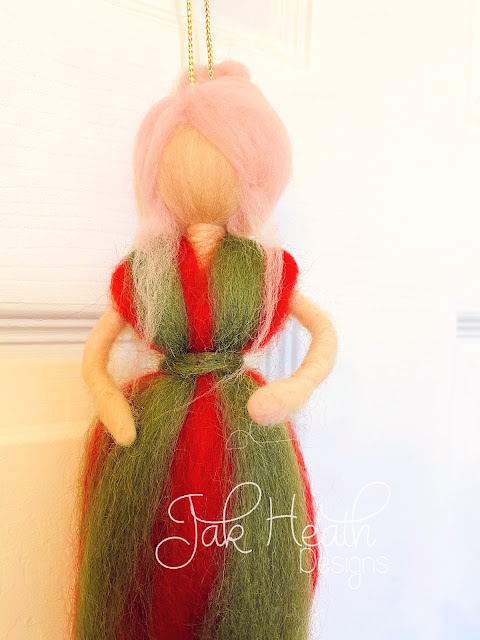 Pin Cushion with a difference

When it comes to pin cushions and sewing we all love something a bit different right?
I started making this with no idea where it would take me but I've falling in love with it. 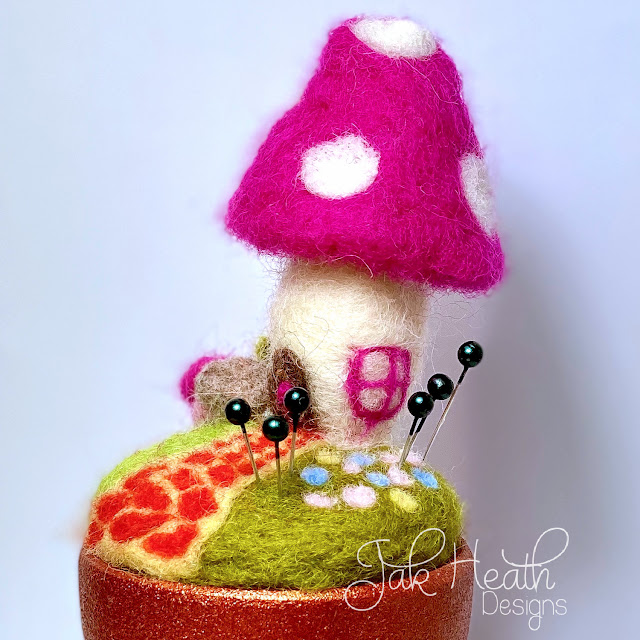 Isn't it just cute? you would think in theory that the smaller the item the less time it would take... but you would be very wrong. 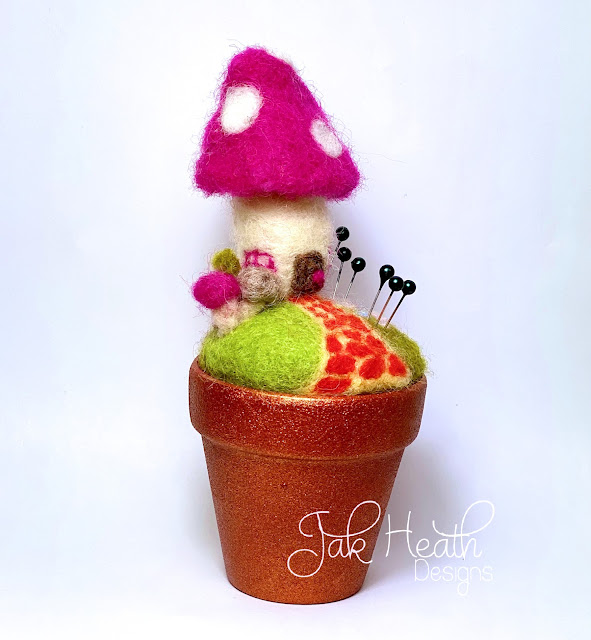 The thing with needle felting is that the smaller the item the more likely you are to stab your fingers haha! so slow and steady wins the race. 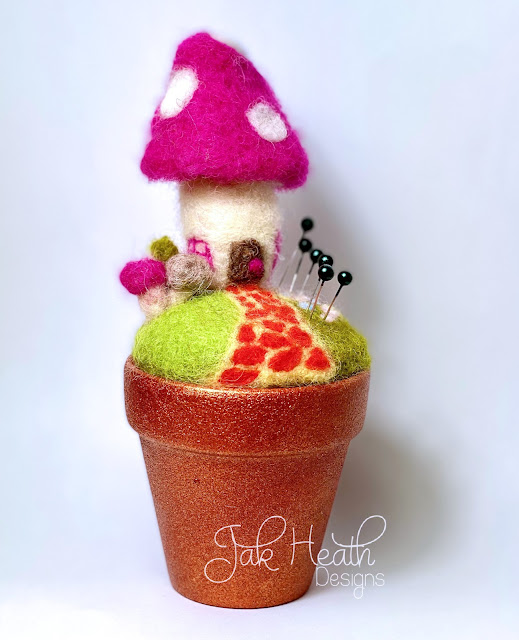 So on a little hill lives a little fairy in her little toadstool house with a cobbled pathway leading to her front door. 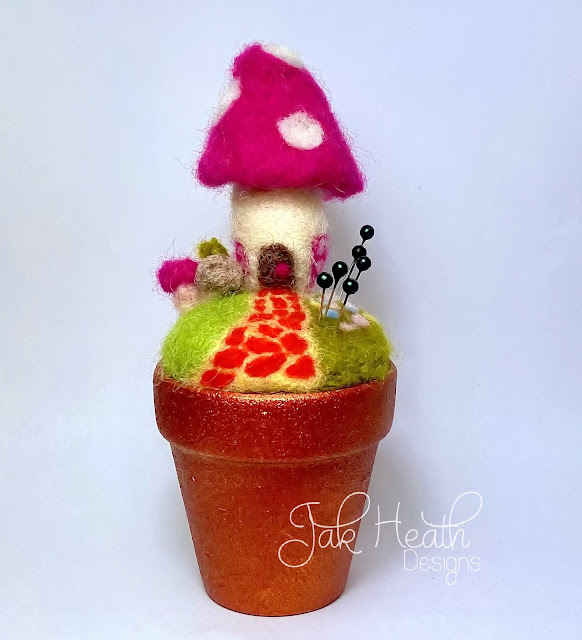 now to make another.

Hours and hours of work goes into needle felting pieces and lots and lots of stabbing of fingers, this wolf is exactly that.
Iiiii've shown a little bit of the building of him in my previous posts but he needed a pelt to finish him. 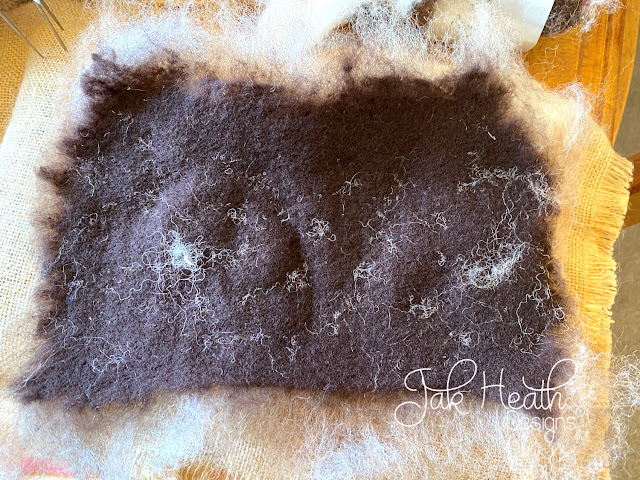 It all starts with a piece of pre-felt, not to be mistaken for felt for sewing as this has a much looser weave enabling you to fray and felt. 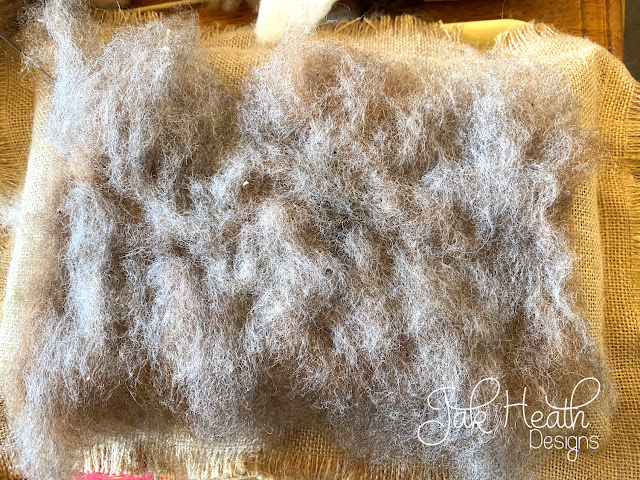 Building layers of coloured top coat on top of the felt.
then tacking it down by stabbing it with the needles. 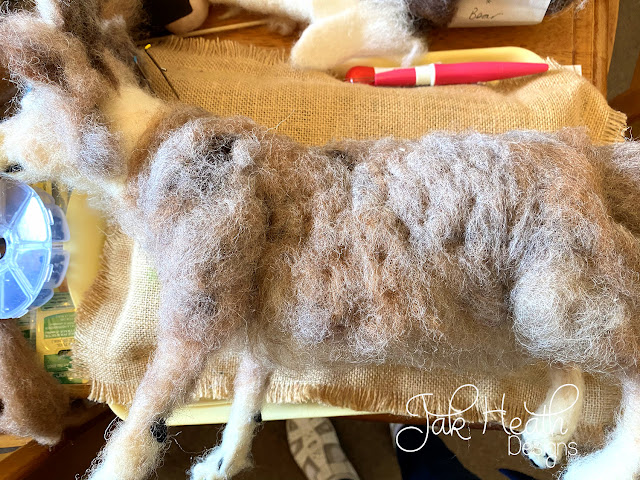 Placing it on top of the model and stabbing it further until it is in place, of course it needs a bit finessing to get rid of those stabbing dimples but you get the picture. 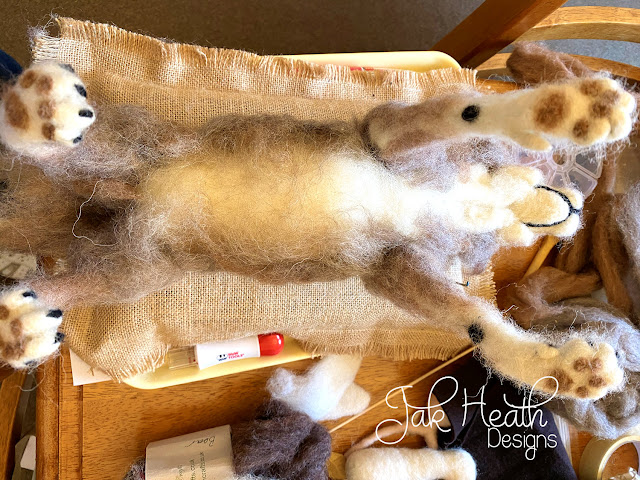 Attention to detail so I flipped him over to give him some paw pads.
Ta Dah! 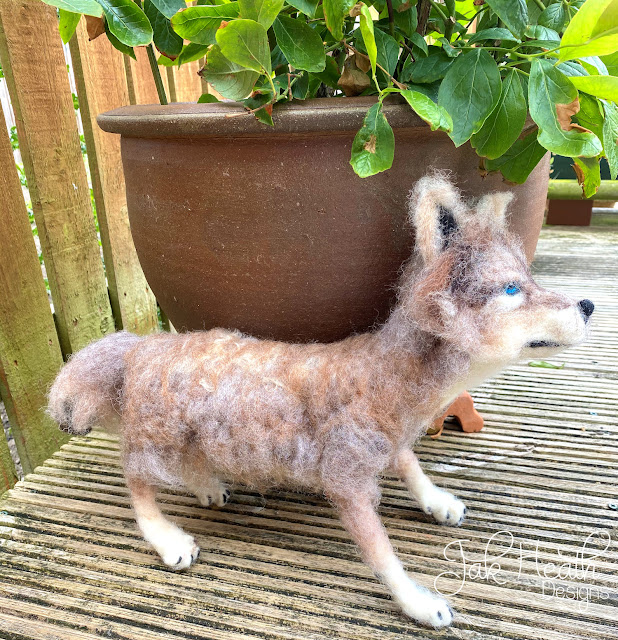 He is done and I love him. 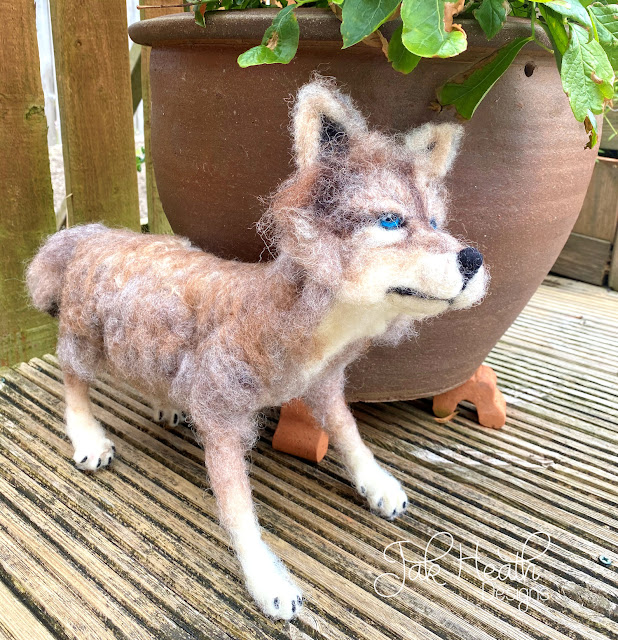 I think he is definitely the Alpha Male of the pack. 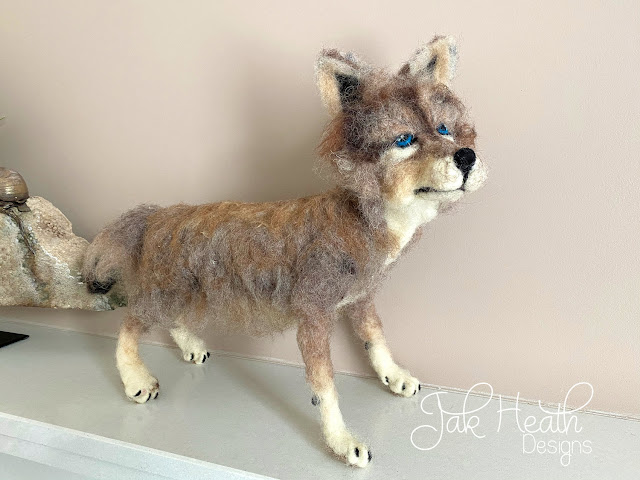 I named him Storm. 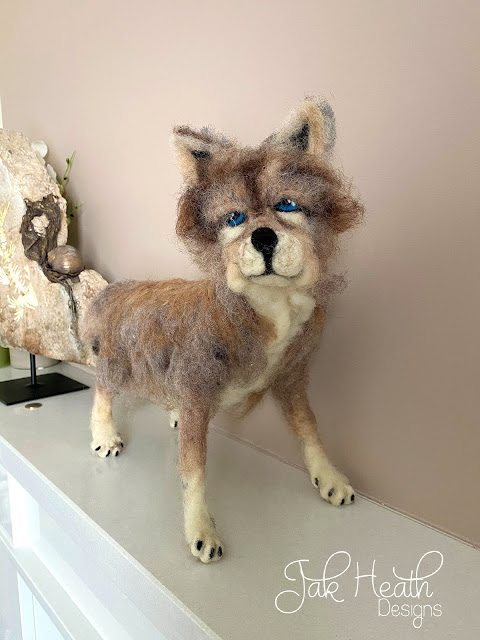 I think he has character


This is a strange post as this needle felted doll was destined for the dust bin as she was a different character and I really didn’t like her. 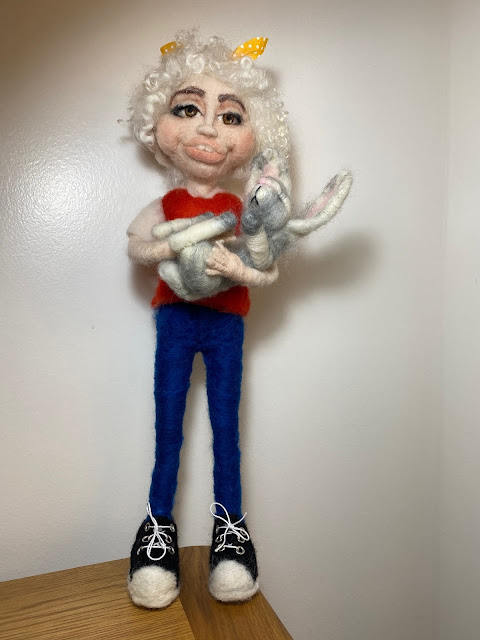 Let me show you how she did look. 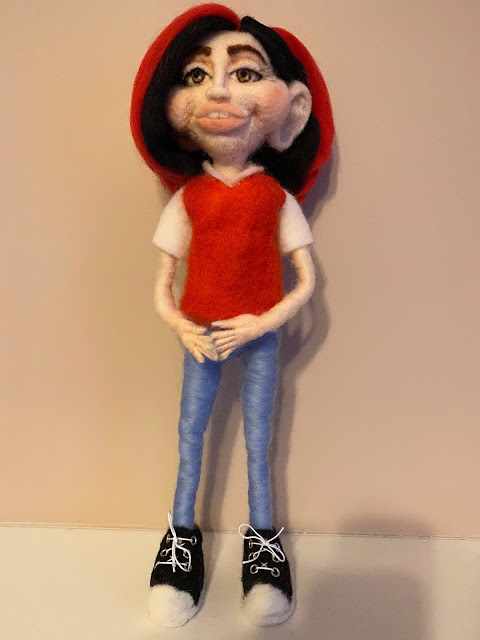 It was really annoying me so I picked her up ripped her hair off and started again. 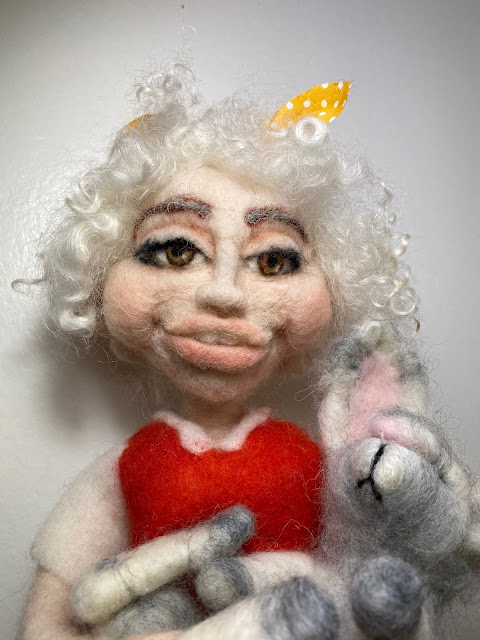 I decided she needed to be platinum blonde and curly, I always wanted curly hair but I gather lots of people with curly hair want straight hair. 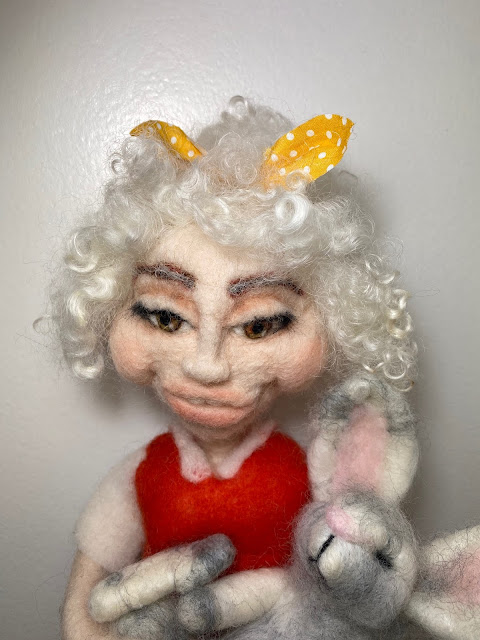 Her hair started off long but I decided to give her an up-do and tie it with a scarf. 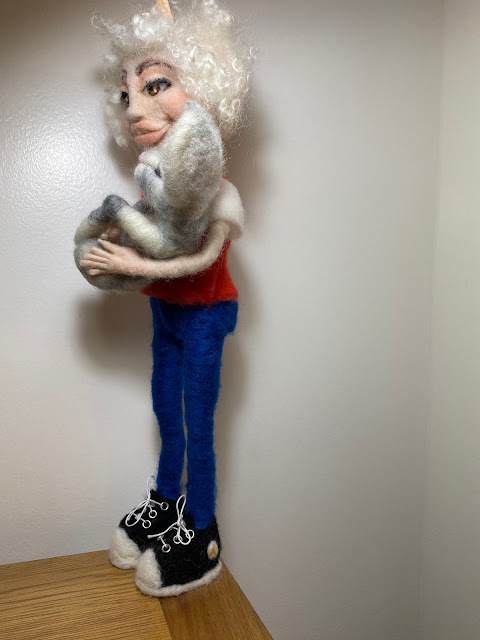 I decided to place a sleeping bunny in her arms and those eagle eyed amongst you will have noticed that I also gave her darker jeans. 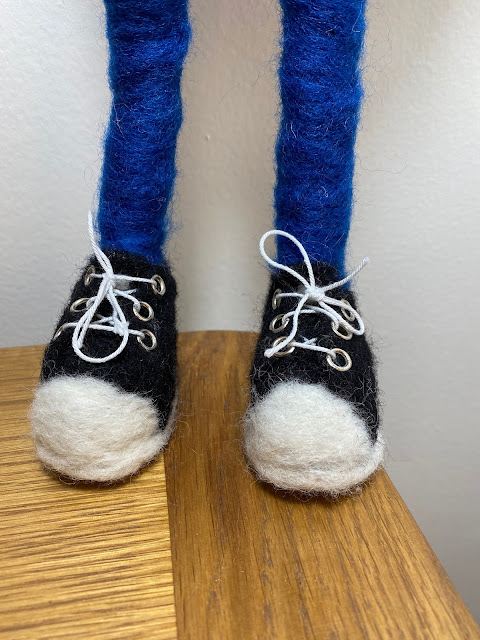 Her sneakers are pretty cool, they took a lot of working out but I’m happy with them. 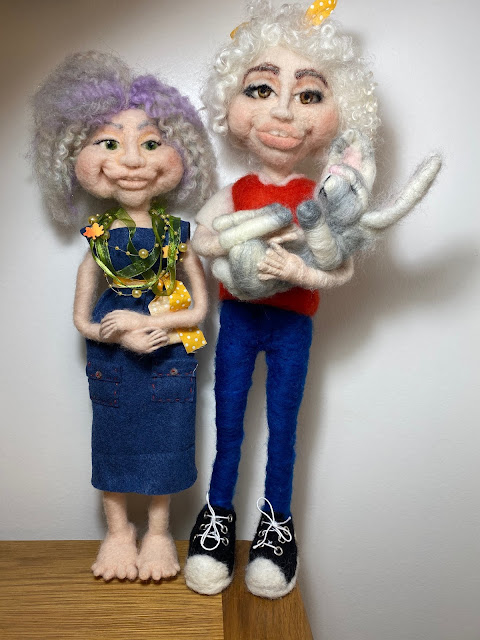 So this is Maggie and her Daughter Susie, Susie stands at 18 inches tall.

Not quite a wolf in sheeps clothing but bit by bit my needle felted wolf is getting to where I want it. As I write this you can't see my dining table for wool haha! 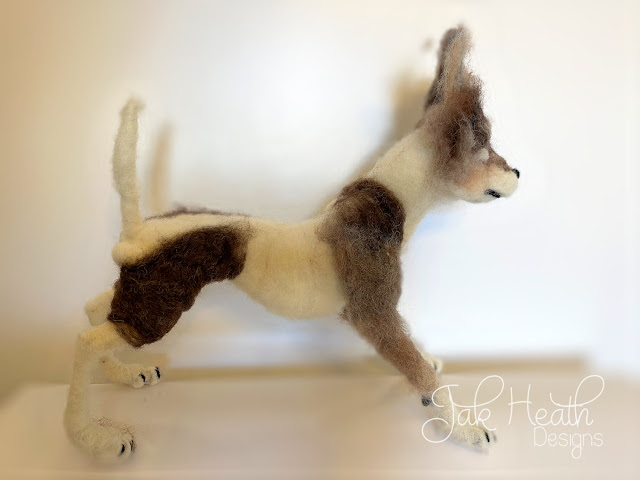 Now you may be forgiven to thinking he has a pair of shorts on but the weather has been glorious here.
No seriously when blended it will all work out. 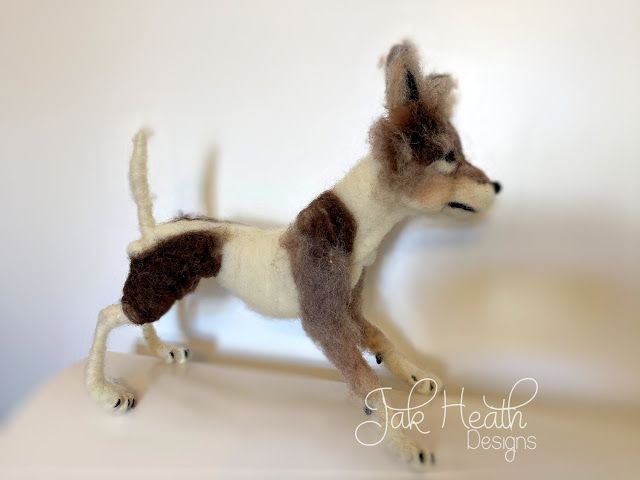 He's a big project and I will try to do a size comparison later. Bit by bit he is coming together, lots of colours lots of blending and not going at this one 24/7, walking away from it and gradually getting the desired shape. 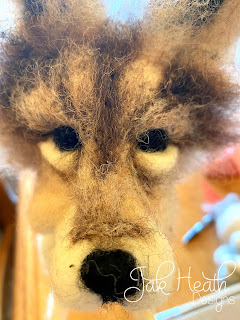 As you can see I need to sort out the line of colour next to his nose as it looks like a ridge at the moment but I will go back to that later.