When is it right to add pink onto a mans card?  Yep I said pink… well I think I can get away with this one. What do you think?

Oh and a bit of trivia for you from Wikipedia.

In Western culture, the practice of assigning pink to an individual gender began in the 1920s or earlier. An article in the trade publication Earnshaw's Infants' Department in June 1918 said: "The generally accepted rule is pink for the boys, and blue for the girls. The reason is that pink, being a more decided and stronger color, is more suitable for the boy, while blue, which is more delicate and dainty, is prettier for the girl." From then until the 1940s, pink was considered appropriate for boys because being related to red it was the more masculine and decided color, while blue was considered appropriate for girls because it was the more delicate and dainty color, or related to the Virgin Mary. Since the 1940s, the societal norm was inverted; pink became considered appropriate for girls and blue appropriate for boys, a practice that has continued into the 21st century.

Now onto my card, Carmen Electrafying by Kenny K 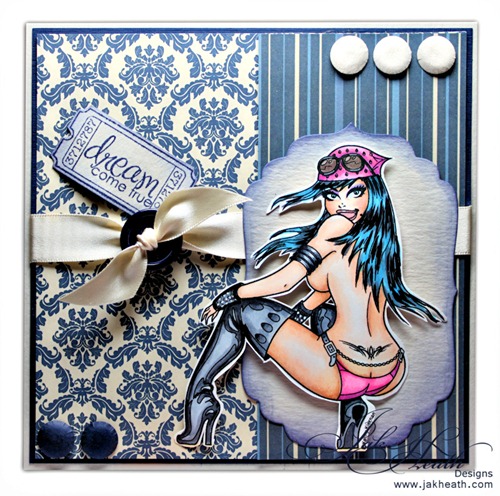 Coloured with Copic markers teamed with Papers from Shery k Designs , I made my own card candy to match the designer papers and used a vitage cream satin ribbon and navy button, Nestabilities Label 4 distressed with navy ink and a whimsey ticket stamp to finish. 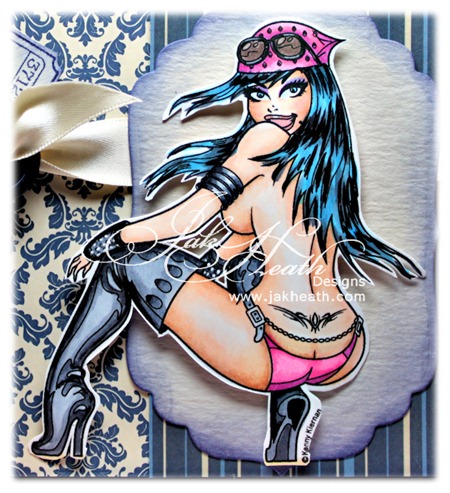 Wow fantastic colouring and a brill card for a man. In this case pink is DEF OK :)

Sexy, sexy, lol, I don't think any guy would object to pink on this card. Awesome coloring love the way you did her eyes and skin tones.

That's a man's card alright! Your colouring is just perfect. Oh by the way I don't think a guy would actually take stock of the colours on that particular card!! LOL

Yeah, LOL I don't think any man would be noting the colours on this one!
Love it Jak! You did it again!
Hugs
Dawn xx

sexy or what Jak and yes the pink diffinitely works on this one. Interesting fact about the colours just shows how things change over the years.Enjoy your Sunday
Myrax

Well all I can say Jak is WOW. What a brilliant card for a man and the colouring is stunning.

Absolutely brilliant Jak, and you have used the perfect shade of pink on that image, it really makes it stand out! Any man would love this card.