I don’t know about you but my dies and not just the spellbinders ones end up rattling around in a draw and I have to rummage through them to find the one I want, I have some of the smaller ones in an album but the larger ones and the border dies left me with a storage problem.

I was contacted by a company which asked if there product was something that I’d like to take a look at, so i popped over to check them out and soon realised that they could have the answer to the die storage problem.

So I was thrilled when I realised that it worked. 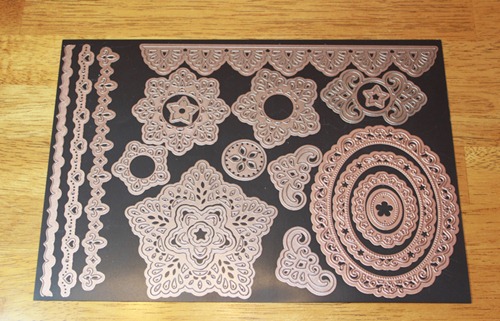 I know it looks like a black A4 a piece of black card but it is in fact an A4 sheet magnet, as you can see you can fit loads on it and better still it has enough pull power to keep them in one place, I even stood the sheet up to make sure they wouldn’t fall of, I then give them the shake test and they still held fast, the reverse side of mine is red but they come in a few different colours so they could be colour co-ordinated to the dies. 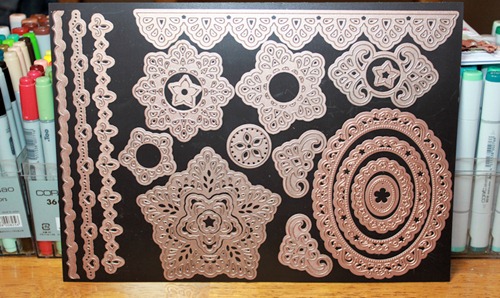 The Company is called First4Magnets and it does just stop at sheet Magnets, take a look at the size of these ones in their craft magnets and because they also do self adhesive ones they would be fabulous for the like of handbag card closures.

I was so blown away with the size of some of them that I added a 5 pence coin next to them to show you. 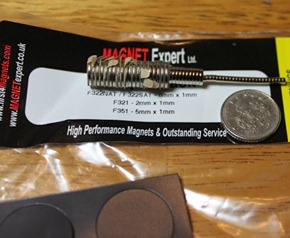 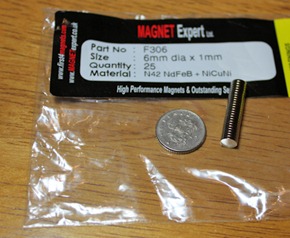 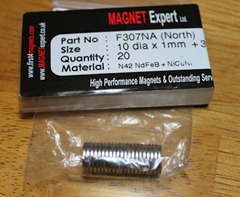 I know that Chris (long suffering husband) has his eye on some of them for his model making.

Hi Jak,
I sent my husband to a local store where they sell magnetic strips. We were able to have them cut what ever size we wanted. I had a certain wall in my room - actually it was behind the door. We measured the size and had them cut a piece a bit smaller. Then I asked DH to make a white frame in which we set the magnetic piece. He attached the whole thing to the wall. I now have a huge, very nice looking place that will take forever to fill up with dies. I LOVE it.
So I know how happy you will be with what you have bought.
Hugs, Candy

Wowsers!!! I love all those magnets!!!
Great to have something reliable to hold those dies!
Hugs
Dawn xx

I find storage one of the biggest problems ,for both stamps and dies ,thanks for the link

I used to buy A4 sheets of foam backed magnet from Hobbycrafts for 50p and cut it up to fit CD cases which I bought from Poundland (something like 8 or 10 per pack!) and stored each set of dies in those. Incredibly cheap bit of storage! Unfortunately thay have now stopped selling them so I was devastated. At least now I can see an alternative. Thanks Jak.

Sorry - I meant Hobbycrafts no longer sell the cheap magnet, although they do a much more expensive alternative. Poundland still sell the CD cases. Hurrah for these cheap places.

I too think it is a great idea, thats how I store my dies at the moment, I buy my A4 magnetic sheets from the £1 shop (2 for a £1infact) and they have an adhesive back so I cut them to fit a CD case for my small dies. But keep the A4 size in tact for my larger dies and store them in a box in my draw. Everything is in place and so easy to find.

I've been using magnetic tape and CD binder things (not cases) from eBay and am happy with that but ... I've had the problem of storing my 12" border dies and the large Grand Caliber sized dies. I'm assuming these sheets would take the GC ones but would they take the 12" dies? At the moment I've got them in the Joy magnetic folder things you can get but I'm happy to get rid of them if I can store them all in one folder.

I buy magnetic paper from the pound shop, attach double sided tape and put them on my craft cupboard doors and sides of cupboards. where ever there is a space. cut them to fit smaller doors,etc.
Susy

Hi Jak, I know what you mean, I looked for ages for good storage and I found a Fantastic Magnetic folder from Joy Crafts. It is A4 in size, holds lots of dies and is very robust and portable. (only £8.99) I just love it.
Crafty hugs. Jo. R. xx

Photo Magnetic sheets, for £1 (brought from The Range,WHAT etc)for me as well, stuck on Card (normally that acid card that i brought when i started crafting - not the acid free stuff that i keep for cards)and then put inside photo albums with the Nestie etc. However keep looking at new folders that OysterStamps have just started selling. But think i maybe able to make my own form folders that they sell in The works.

Very tidy! I was lucky enough to grab some of those magnetic adverts you stick to the side of your car when my B-I-L retired and I've got these mounted on a wall in my craft room. I can see at a glance where the dies are and they're easy to choose from on there. They're maybe A2 sized so plenty big enough I would have thought......seem to be outgrowing them though :D

I buy this stuff from these people too, but I also bought some crystal DVD covers and I bought the magnet on a roll last time which cost less, I cut two pieces to fit one each side of the DVD case then stick the packaging so you can see what is i there two sets to a case. I plan to label the spines so I can grab them quick.

Yes, I use these sheets too. I buy mine in the Range, although many places sell them now - I've seen them in Asda before now and I believe you can also buy thyem in some of the pound shops. They must be made for these dies!! VivP xx

Thanks Jak , mine too are hanging around in draws Hugs Elaine

Thanks Jak , mine too are hanging around in draws Hugs Elaine

Jak what a brilliant Company to find. The first thing I am going to do is find them on line. Best thing since sliced bread. The little magnetic discs are so sweet as well. Thank you Jak.
x Val

I too keep mine on magnetic sheets and in a tall folder that's meant for cd's. It keeps them tidy in my messy craft room lol.

I have been looking for a better storage ideas and this looks like something I cand try. Is it easy to get the dies off the sheet again? Or are they really stuck on it? :D 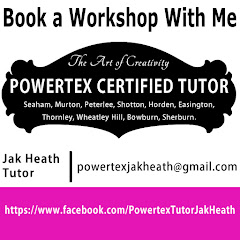 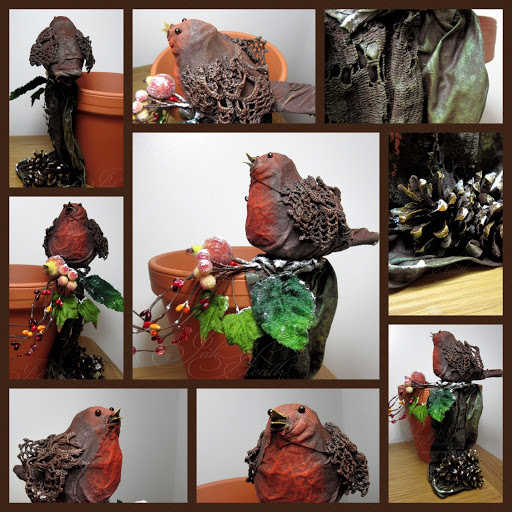