I think most of you will remember me telling you about my Dads Father and the photograph that I restored as they had very few photographs left as their home was bombed during the war.

Well yesterday A friend was trying to restore one of her families pictures and I couldn’t help myself in playing with it to help her out. I did get it looking better and then I recalled her saying that she would have loved to see it coloured so I gave it a go, I’d never attempted to colour an old black and white photograph but I figure if you don’t try you will never achieve.

The result was really good, obviously I couldn’t show her photographs as I haven’t asked permission so I then set to and did one of my own families.

I’ll show you the before and after so you can see the difference.

My Mam with my eldest brother Alan the Original Photograph. 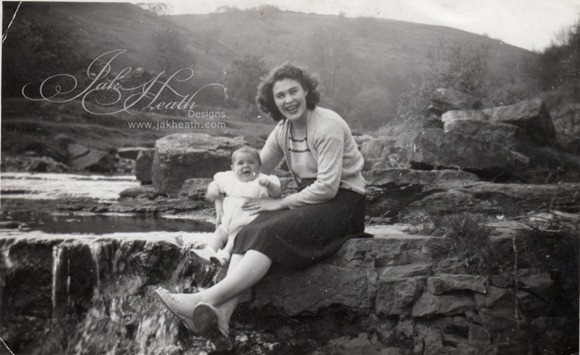 The restored and coloured Photograph 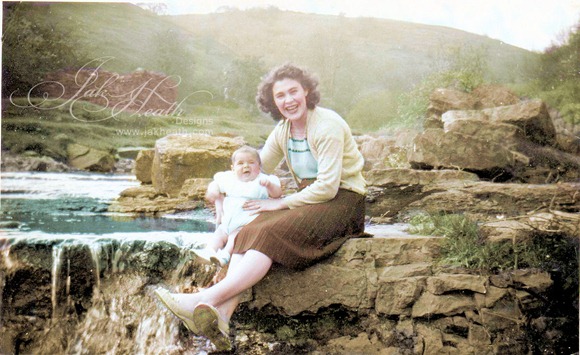 I didn’t remove all of the blemishes purely because I wanted to leave some of the old character intact.

Wow Jak this is amazing. What a special gift to give someone - you are clever!

That's amazing! What software did you use?

Wow, Jak amazing. Is there no end to your talents!!!

wow! Jak that is fantastic!!!

'morning Jak, that is unbelievable!! How clever.How did you find out how to do that please? Mabex

Amazing work Jak, you are so clever with your colouring, I wouldn't have taken on such a task it looks far to hard for me...
Love ~ Lady Anne xx

You are truly and amazingly talented!

Lovely pics and it is so nice to have both black and white and colour of the same picture.

Jake you're truly a talented lady is there no end to what you will not try. You made a fabulous job its really natural. (you look so much like your Mum) I bought My Memories Suite only it has nothing in it so will have to wait to start playing. I was so impressed with the pages you did with Jack you spurred me on they really told a story, never done this before so I'm looking where to start but I will get there in time.
Thank you for all the pleasure you give us Jak. x

Penny go to the free layout section there is loads to get you started, they will go into the purchases and themed sections on the software, if you check out those sections now there will be stuff in their for you to play with.

Is there no end to your talent. This is absolutely amazing, I have just got the Serif programme from C&C and am starting to play with it, I hope that with practice I can be half as good as you.

Wow , what a difference, brilliant. X

that is awesome! You did a fab job. It brings it to life!

Absolutely brilliant! Reminded me of my teenage years (no coloured photos then) when I coloured b/w photos using special papers that I bought from the chemist. Had a nice little business going then!

Wow, Jak, that is amazing. I am also trying to restore to old photos from my husband's family album, but never thought that a person could color some. I would love to know how to do this. You are one amazing lady.

As you know I am already amazed at your talent, as it was my photo that you restored. I had mentioned that she was wearing a lilac dress in my original photo, and you reproduced it to perfection.

ps anybody that would like to see what Jak did for me can find the before and after photos on my blog:
http://nannygees.blogspot.co.uk/

This is amazing Jaz I used to love restoring old family photo's for my FH but never coloured any before.
Superb!!
Hugs Mau xx

What a great job youve done Jak I bet your friend was pleased with hers?his too.well done you
Myrax

Hi Jake there is no end to your talent,what a fantastic photo, and to be able to change it to colour,I have a lot of family photos from my Dads side verry ,very old, I would love to be able to do this ,so on my to do list when the wedding is over
Smiles
Ita

WOW! What an awesome job! I soooo want to learn how to do this! What software did you use? Blessings, Sharon

Absolutely amazing Jak, you are so clever. The coloured image looks so natural. Well done.

Photo retouching has long been a hobby of mine. I ditto the comment on what software you used. Awesome job!

Wow, Jak ... fabulous! What a very talented person you are!! The photo looks superb xx

hi jak you have made a great job of colouring the photo.It was a lovely day out too. We were at the wood at Eastgate such a beutiful spot.That was about 10yrs before you were born but of course you also went to the same spot, and your bairns. Where have the years gone. Oh such fond memories. Love Mam.xxx