I know boys will be boys and I’m sure he will have his fair share of bumps as he is growing.

He went head first into the door stencil at his Great Nanna’s house and had to be took to the medical walk in centre.

They patched him up by gluing the wound together and applying sterri strips to hold it in place. So all sounds good yes?

Nope, they ended back again to the walk in centre as he banged it again and it opened right back up, This time he banged it on his Granda’s (Stuarts Dad) nose whilst kissing him goodbye. This time unable to glue it and floods of tears, Once again Sterri Strips applied but boy it looks nasty, very swollen still and the bruising is now coming out. 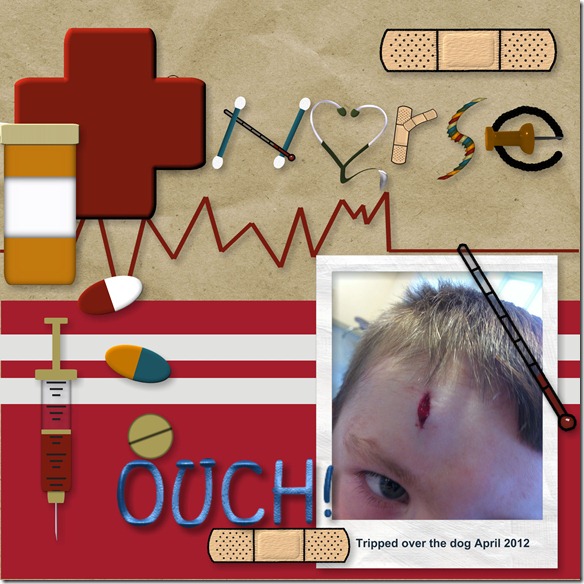 Email ThisBlogThis!Share to TwitterShare to FacebookShare to Pinterest
Labels: Family

I wonder if it has anything to do with the name - I have a Jack too and he is quite the daredevil. xx

cute page. way to scrap it fast before the pain goes away! poor guy, hope he heals quickly.

My son is the same age and tripped over his own feet at nursery resulting in a very similar looking head injury (in the same place too!). He was sent home with sterri strips but kept pulling them off in the night so we ended up having to put a huge plaster on his head to try and stop him pulling them off! He now has a bit of a scar but according to daddy "chicks dig scars"...

Looks like stitches to me, bless him. I think all mums have been through this. I know I have. Give him a big kiss from all your cyber friends.

Oh dear poor Jack, but as you say, "boys will be boys" and know doubt it won't be his first nasty accident. I bet it made you feel bad though?
Love ~ Lady Anne xx

Poor Jack. My son was forever banging his head....so much so that everyone joked that he was trying to grow himself a unicorn horn lol. I hope little Jack feels better soon. Hugs lin

Been there with my son, years ago, felt awful. But he was proud of his bump and scar and kept showing it off to everyone.
Hope Jack is soon on the mend.

Ouch!! That does look like it hurts.
Poor little boy...
Give him lots of hugs and kissses...
Heal well.

Oh Jak ..........poor Jack and poor you and all the family!! What a worry! As you say, boys will be boys. Let's hope he soon recovers and that it doesn't give him too bad a headache.

P.P.S The page is wonderful! xx

Boys will be Boys, when my son was 5 he had an accident involving his chin. After a trip to the hospital to have it glued we got home to find that the glue had droped off. So we went back and this time they stitched it. I'm sure it won't be long before he's forgotten it and is running around again. A big hug from Nanna is sure to help.

Poor baby! Funny this, I was sorting photos for scrapping the other day and found several of one of my boys who had loads of stitches in his face!

ouch!!!! poor little man...i have just the memories of my boys when they were that age and remember them play fighting but my stephen threw my kevin onto his bed near the radiator but he didnt miss it and fell hard against the corner of the radiator.. hitting the back of his head blood everywhere...rushed to A*E and he had to have stiches then on the way to the car he banged it again onthe car roof getting in...so i can understand complety and yes boys will be boys but dont yer just love em...hugs sassyxxx hope he gets better real soon

Bless his heart the little pet, I hope he feels better soon (my kids always found that chocolate buttons made most things better).

Ouch! poor lil' soul, I guess that will leave a scar. It's amazing how these little one's bounce back. My little grandson fell of the bounce-a-lean (as my little Jack calls it) and split his tongue right down the middle. He recovered well as I'm sure your little Jack will. LOL x

Poor Jack. Looks nasty, hope it heals well. My boys both broke their front teeth when they were playing about and teeth don't mend themselves.

Ohhhh that looks so sore. Hope it's not hurting him too much now and give him a cuddle from me next time you see him. Great Scrapbook page too Jak.

I love your family updates, Jak, especially the ones about Jack. He is so adorable I like to just give him a big 'ol squeeze....so I count on you to do that for all of us!!! Poor little Jack, those head wounds are so painful. You get better fast, Jack!!!! Hugs, Sharon :o)

Poor little tyke! Bet kisses from you helped him to feel better. Hope it heals quickly.

Poor little Jack, I hope he's healed up in no time.

Poor little guy!!
Oh boy remembering all the bumps and bruises along the way with my active little girl when she was young!
Broke her arm, got the cast off and next day broke the same arm!!
speedy recovery!
Hugs

Hope he can have a laugh about his looks soon and remember the lovely time he was having! Wishing him well.