Eeek! I Bought a Card

Being an avid card maker it is few and far between that I buy a shop card. Most people expect a hand made card and it always feels as if I’m cheating if I do buy one.

Last year while we were in Kendal (my favourite place on earth) I was window shopping, not many places you can do that these days as most of the shops have metal shutters. Anyway I spotted some very, very interesting cards and went back the next day to take a closer look at them.

being from a fishing village ourselves I knew I had to make a purchase and actually, shamefully I bought three cards. They are all swinging cards that pop out 3d but lay flat in an envelope, ingenious the way they have been made. I took a couple of photo’s from different angles so you can see how clever it is. 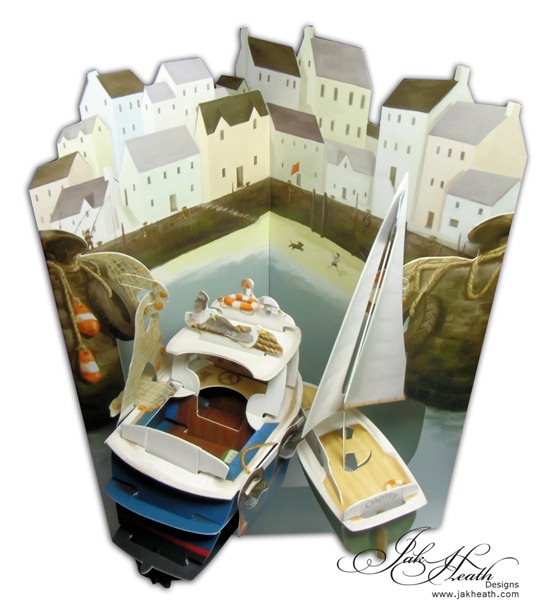 This one is destined for my Mother and Father–in-laws Anniversary, they lift in the same village as us so will totally appreciate it. 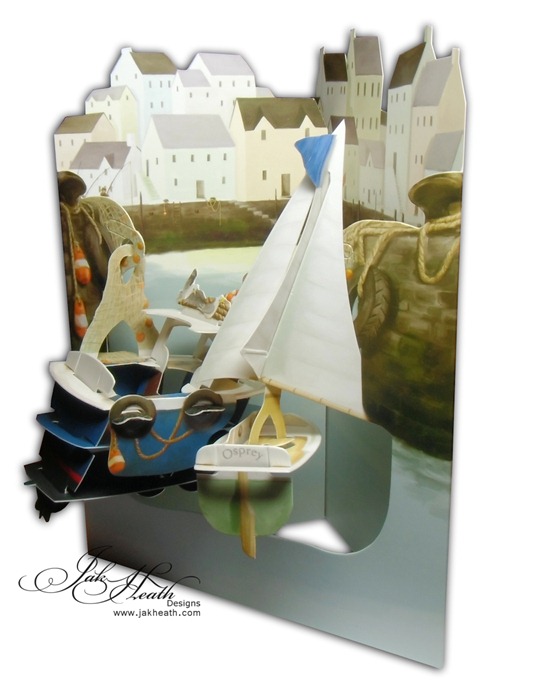 The company that make these are called Santoro. Not cheap but very different.

Awesome card Jak, cannot wait to see how you will recreate it!

Knowing you, I will expect a tutorial soon on how to make these cards. Nothing is impossible when it comes to you and your talent.

Before reading the comments I thought about you recreating it. Will be waiting.

Hi Jak, these cards used to be sold in Darrell Lee (the chocolate shops here in Australia) and they stopped stocking them. I am delighted to have found them again. Funny thing they also do the Gorjuss girls and I have used their decoupage sheets before and just didn't connect these cards with the 3D sheets - small world eh?
If anyone is interested Santoro's web address is: http://www.santoro-london.com/shop/swingcards/

They are fab cards and I can see why you couldn't resist buying them.

Wow they're fabulous but in your defence they're more like ornaments than cards :c) x

You are more than allowed to buy cards like that Jak, so very unusual and i am sure your in laws will more than appreciate it.
My dad loves boats so he would also appreciate a card like this. The place my dad was brought up as a young man looks very much like this card.

oh wow i love these, they are stunning more a work of art than a card. I bought a card the other day and nearly dropped when i saw the prices they charge now for a standard card but these ones i would pay dearly for, stunning xx

No wonder you gave in and bought some Jak they are fantastic and well thought out would be hard to handmake Im sure.
Myrax

Wow, those are really neat cards, no wonder you gave in and bought them!

Santoro are so clever what a FAB card.
Thanks for sharing Jak
Hugs Elaine

They are very clever cards, I think you could be forgiven for buying one (or 3!)
My brother bought one for me for my birthday with a Formula One car on it - I spent ages looking at it to see if I would ever be able to make something like it. But I just wouldn't have the patience!

These are so so clever! I can't blame you for buying them! Have you worked out how to make them yet?? ;)
Lizy x

Wow,can't say I have seen these cards Jak,Its great.
x

Opportunity may knock only once, but temptation leans on the doorbell.Talk to a man about himself and he will listen for hours Teaching English

Hi Jak,Have been following your blog for quite a while now,so thought it was time I let you know how much I enjoy it.Love reading about your family,and hope they are all well.Also thanks for the lovely freebies they are much appreciated.