Day 3 in the Big Plan

The pipes have been diverted to the opposite wall for the shower and the floor has new wood ready for tiling, the pipe for the heated towel rail are also in place.
Mainly Prep work for tomorrow has been done today.
I did tell Neil that you wanted a front view of him but I think he's shy, maybe tomorrow. but the electrician Paul wasn't hiding, in fact he was posing if you care to read further down. 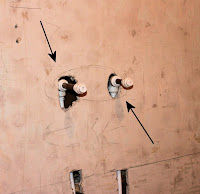 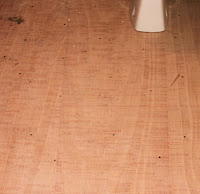 So I now have a lovely painted white ceiling and the wiring is done for the light and the square box on the wall is my extractor fan, so now when Natalie turns the bathroom into a steam room with a quick shower that turns into a 40 minute one hopefully most of the steam will be sucked through that baby. 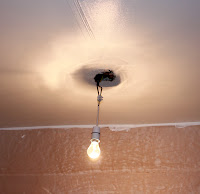 So today was the day that Paul was coming to fit the extractor fan, now Chris took a picture for me as I was still at work and he was here in the morning. Chris joked when he handed me the camera saying he was striking a pose that I would recognise.
Now forgive me if I'm seeing things but talk about Love is in the Air add Paul drilling and what do you get?
Yep he's a dead ringer for Cupid don't you think? 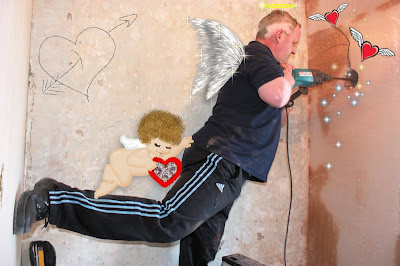 Sorry Paul I couldn't let it pass without giving you wings and a halo.

Email ThisBlogThis!Share to TwitterShare to FacebookShare to Pinterest
Labels: Home

LOL!
You are so lucky you don't live in South Africa, it would have taken three weeks to get this farand that is if you are very lucky.

Great to see the latest pictures Jak and i too love the wings and the halo. You are a wee devil i think. Can't wait to see the next pictures.

Coming on nicely then and bet Paul will kill you for this lol :0)x
Myrax

Well at least you, and us, are getting a laugh & your workmen are good sports! It makes the unpleasant more palatable for you at least and it'll soon be finished! D'ya think it's all daughters that turn the bathroom into a sauna - I have no sons for comparison but my prospective SIL doesn't steam the place up? Smooth sailing, Hazel x