If I could send my Dad a card then this would be it. He had an allotment when I was young and grew all of his own vegetables. He’d of loved this card.

Gardening Boots His by Just Inklined 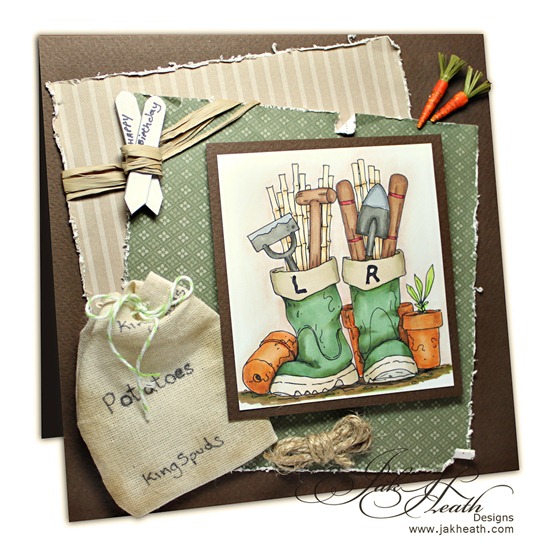 When Dad wasn’t at work he was at the allotment, mam used to put up a flask of coffee for him and I would run up with it, I often dropped the flasks and recall my Mam warning me one day not to drop it, of course I did and was frightened to go back home but Dad told me to say nothing and he took the blame for it. Ha ha I could wrap him round my finger but I worshipped him all the same. 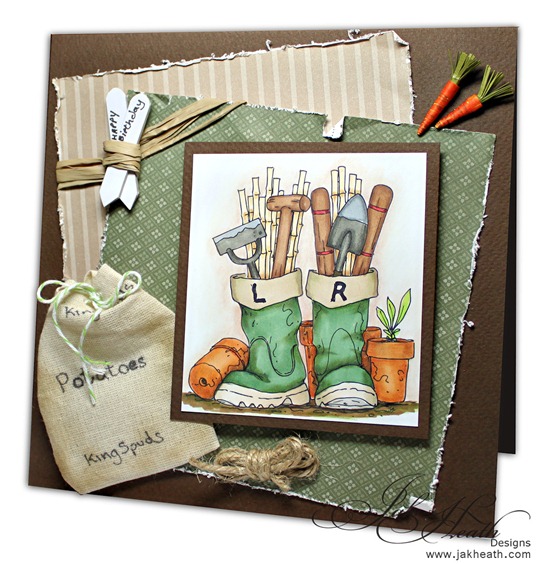 I remember when he bought some chickens, he was to fatten them up and we would have them to eat when they were fat enough, each week he would be asked if they were ready but of course he made the big mistake of giving them names and looked on them as pets, he spent hours making crowdy for them to eat to fatten them up but I don’t think we ever got to eat one.

I could go on for hours about my Dad but I’m sure you want to know about the card.

I coloured it with Copic markers and prisma pencils.

I also made all of the embellishments

The little potato sack was sewn from a piece of sacking and the plant markers made from scraps of card. 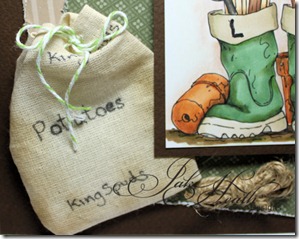 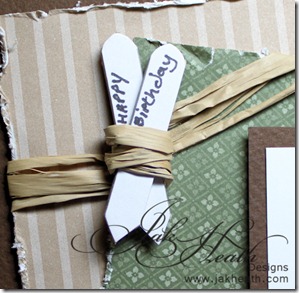 now the carrots were a labour of love made by quilling paper then coloured up. 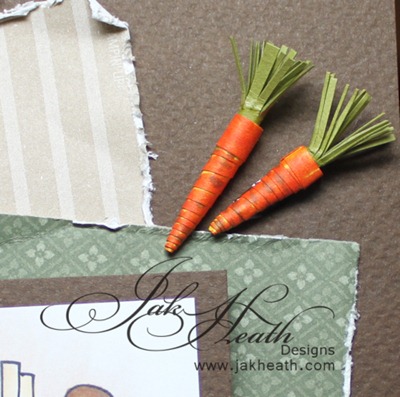 I thoroughly enjoyed making this card up, partly because I reminisced all the way through making it.

Oh Jak, I love this card, I know what you mean about talking about your Dad, I too can do the same, My Dad had a finger in every pie so to speak, he had lots of hobbies including gardening. He would have loved this card too. x

Absolutely fantastic Jak and the carrots are out of this world, so clever! Great card!!

Fantastic card Jak, i love it and your carrots are fab, what a great idea. Love this image and you potato sack is great too.

Fantastic card Jak, i love it and your carrots are fab, what a great idea. Love this image and you potato sack is great too.

Beautiful card! Thank you for sharing your sweet remembrances of your dad.

Wonderful card and great memories of your father...
I like how you put L & R on the booths...well done

Hi Jak fab card - memories of my childhood too x

Beautiful card Jak and the reminiscing of your dad, thank god for them I say.
Crafty Hugs

a wonderful card, but even more wonderful is the memories this card gave you to share!

What a fabulous card! Thanks for sharing the stories about your Dad...you made me giggle! I miss my Dad something terrible!
Hugs,
Renee

Fantastic card as usual. Love the carrots, look good enough to eat.
Thanks for sharing the memories

Love this card, it's true what they say a picture paint a thousand words. Mabex

love the card the little sack bag reminds me of when we wre younger we would get gold bubble gum in them piece of nuggets what a throw back to the sixty,s from lynn

What a lovely card, I know several gardeners who would love it. It's really lovely to hear you talk about your dad with such love, he must have been a very special person.

Fantastic card Jak, what a labour of love, so much thought must have gone into it. love the sack and the carrots xx

What a lovely card, and even more so, how lovely to remember your Dad with such fond memories while you were making it. I bet your Dad was ever so proud of you Jak!! I love the carrots and the sack.

Hi Jak
Gorgeous card! The sack is fantastic and as for your carrots, amazing! Please could you tell us, if possible, how you made them please and if it is possible to make them if you don't know how to do quilling? Love the story about your Dad, the flasks and the chickens, hope none of them ever made it!
Take care
Debs x

oh this is fabulous .. i just love the embellies
Lisa x

Jak, this is absolutely beautiful!! Love all the detail and of course it's so much more special because of your memories! Thank you so much for telling us all about your very special dad xx

Jak this is brilliant. I love all your hand made embellishments x

Your Dad would have loved it x