Well it has been a very stressful few days, Jack was so poorly he was took into hospital and you wouldn't have given him twopence the first couple of days he was so poorly.
They had concern for a large lump under his arm and after a ultrasound scan it was confirmed to be an abscess.
Today he was took to theatre to have surgery to have the abscess drained.
The operation went well, they have left the wound packed but open to allow it to drain and although he is still a very poorly boy hopefully he will be on the mend real soon. 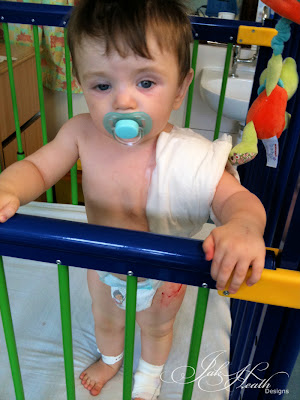 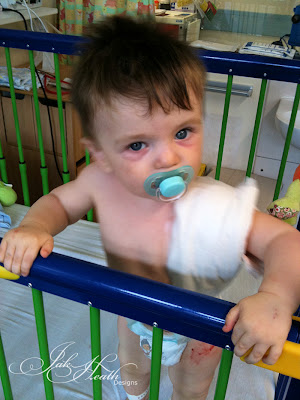 Thank you for all the care and concern you have shown, Lauren, Jacks Mam has been reading all of your kind words and appreciates all the thoughts.

Poor little guy, I hope that now he's had his operation he will pick up very quickly. Wishing you all a bit of peace now.

Awe, poor wee thing, it makes you felt helpless, those big eyes look as if they've shed a lot of tears. Bless him. Hope he is soon back home with you all.
Hugs
Suzi x

Aaaah he looks so tired and not well at all, give him a big big hug from me, i do hope he is soon back home with you and looking and feeling much better really soon. hugs carol

Oh, Jak, I'm so sorry Jack and your family have had to go through this ordeal, but so hope Jack is home soon and completely well. Take care, all of you!!!

Ooops sorry i nearly forgot what i came on for.. jak just wanted to say THANKYOU for the stamps much appreciated, x carol

oh what a poor little peanut. It is so sad when wee ones get sick, but heartbreaking when they get critically ill. Glad to read he is on the mend. Thank heavens for binky's and blankeys! Hugs to you all.

Give him a hug fro us. You are all in our thoughts Bee and Dee

oh no, poor little baby, and so sad and scary for his family! Here's hoping he is just a perfect little ball of fire soon!

Oh - poor little mite - I have he recovers soon. What a worry for you all.
Hugs
Valxx

Oh poor Jak, he really does look as though he's had a rough time. Glad he's on the mend now, he'll be back to full fitness in no time.

Best wishes to you all.

Poor little guy. He doesn't look very happy. Hopefully very soon he will be back to his usual self with big smiles. Love and good wishes to you all

Hope Jack has a very speedy recovery now and is soon running you all ragged. Big hugs, Christine x

Poor little soldier Jak. He has been through the wars hasn't he but looking at him I think there is a little fighter in there.
I hope he makes a speedy recovery & is as good as new soon.

Awww Jak, what a shame for the wee man, he looks shattered. I hope now that he's had his operation he will be back to his usual smiley self soon.
Give everyone a hug from me.

Poor little man. Children are so very strong and resilient. He'll be back on his feet before you know it. Love to you all. Sue xx

Poor Jack, he looks poorly but he also looks like a little fighter.

Hope all goes well for him now.

Jak
We keep you and your family in our thoughts, hearts and prayers.
Poor wee mite looks so sick. Hopefully now they will have got a start on making him feel better.
Myrna

Poor lil guy! I will keep him and your family in my prayers. Nothing is harder on a mom & grandma then a sick little tyke!! May God be with you always!

Poor Jack, hope he is feeling better soon, its awful when they are so small, hugs to you all, love Steph

He looks so lost and tired, you just feel so helples when little ones are ill. Hope he perks up vry soon.

Awww Jak poor likkle scrap does look sad...hope hes soon on the road to recovery & we can all see his cheery smile again.

Awww bless the poor wee mite. Give him a big hug from me and I hope he is on the mend and home soon.
Maureen......x

Poor little fella, I hope that he gets well real soon now he's had his op.
Pammi x

ah bless his little heart, you must of been beside yourself with worry, so pleased it was just an abscess. Hope he has a speedy recovery x x

will hold fingers that jack will feel much better

aww ,, poor little lad ,,, he does look poorly bless him xx Hope he recovers quickly and is soon able to go home ,,,

Poor wee soul, he does look poorly. I hope he is on the mend now. Elaine

Awwhh the poor wee man really does look poorly. I pray that he is now on the mend after his op. Thankfully he will not remember any of this ordeal (unlike the adults who all need a big hug)
Best wishes to you all,
Trish xx

OMG Jak - I am so sorry to read about poor little Jack... I had no idea - I haven't been a brill blogger recently - but just looked on dashboard and read this.... How awful and worrying for you all... I hope he soon makes a full and speedy recovery and that he's crawling around and back to his usual self before long.

Oh my word those eyes! Will be praying for a speedy recovery and senc love and healing his way. Hold on to each other for support and soon he will be bouncing around again. Lil' uns do go down so fast but they can also jump back up pretty darn quick.

Love and best wishes to all (grown ups included)

Sorry for the late posting, I'm glad sweet little Jack is doing better and prayers being lifted up for his speedy recovery.

Hi Jak sorry to hear about the wee man, hows he doing now