My Mam has been having a clear out, actually it is an on going clear out, during which she is coming across things that she didn’t know that Dad had or even kept.

Dad was a Blacksmith and worked at Dawdon Colliery he worked 7 days a week and in his spare time he has an allotment (spare time indeed) My Dad is on the right of this photograph. 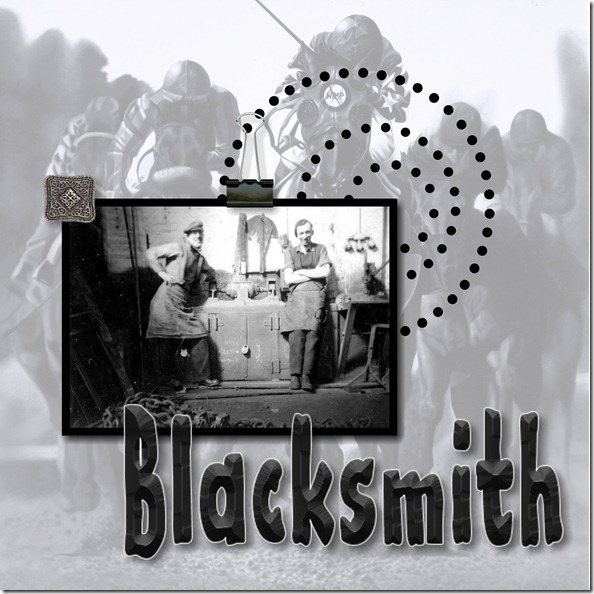 So Mam happened upon a log book from when Dad started to look after the cages that took the men down the coal mine. She remembers that Dad didn’t sleep for a week when he first took charge of it. 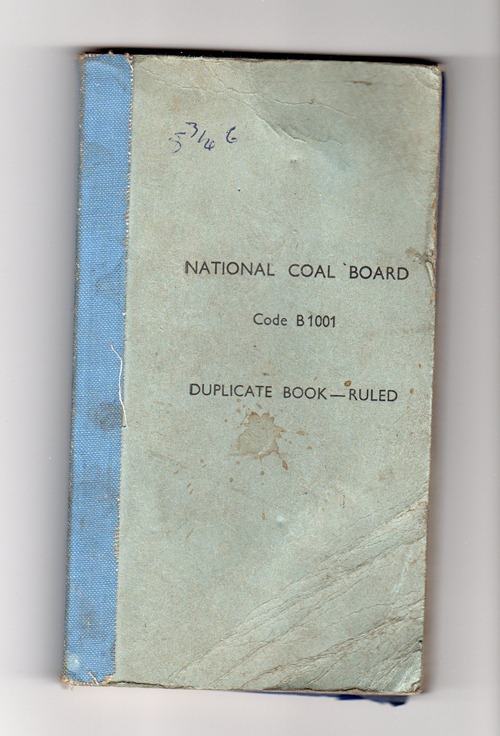 It dates back to 1967, I’d of been 2 years old then, isn’t that a brilliant find. he lists things that don’t mean much to me but I'm sure the miners from Dawdon would understand it.

Something that struck me about it was how neat his hand writing was and also that my handwriting is very similar to it. 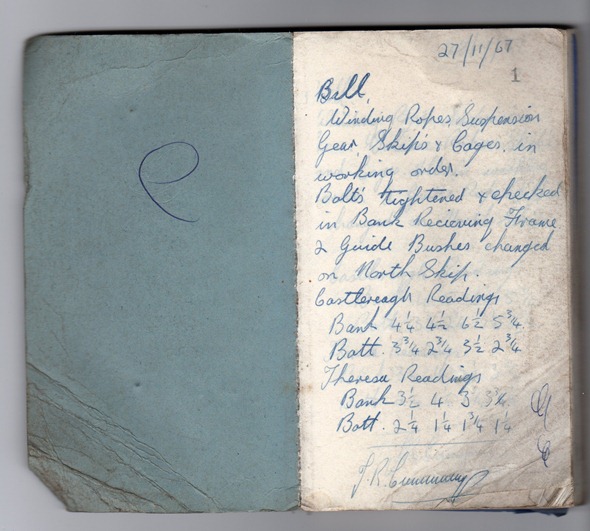 It this inspection he states that the bottom door is cracked and that in his opinion it needs replacing. 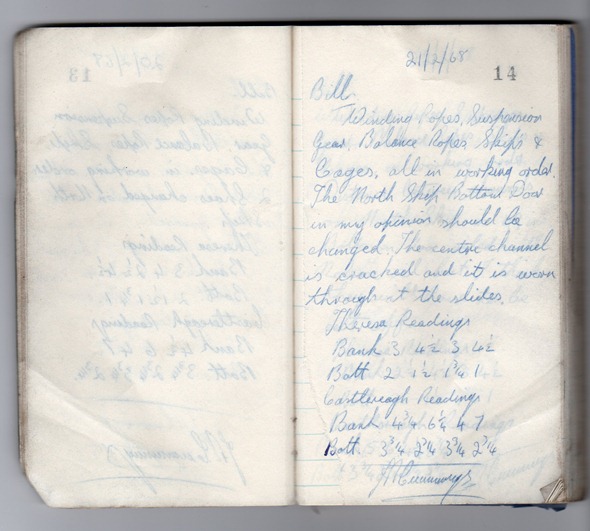 I know that many of you were following me when we lost my Dad so I thought it would be nice to share this with you all.

What a wonderful find indeed! So lovely for you to see your dad's work and the care he took to ensure the safety of others. What a great memory to add to your others. And the photo is fabulous!
Thanks so much for sharing your memories with us!
Sue Brailey

A great find indeed Jak & lovely of you to share this with us!!
HUgs
Dawn x

What a treasure to find Jak and being from about your start in life almost make it even more special, as it gives you a tiny feeling about, how things were those days, and it sure shows you a lot about how and who your dad were in these days, which is soooo valuable informations, that not many of us have, and at least not in writing like this, so it´s definitely a treasure. And what a great picture of your dad too, he was such a handsome man, that´s for sure. Thanks sooo much for sharing this with us.

What a lovely find Jak. I'm sure it's hard for your Mum to do this but there must be some great memories for her. We found my Dad's log book which shows which ships he sailed on and when x

Hi Jak
I lost my Dad 2 years ago and we are still finding bits and bobs of his some are just paper with little drawings of things on his 'will make sometime' list and draft letters which I treasure as I loved his handwriting, I also have some paper work from the many years he was in the services.
Tina x

What a beautiful find ,thanks for sharing .Melanie

Oh Jak how lovely for you to have this, I love this kind of thing....
I have all my Dads stuff from when he first joined the Navy as a 15yr old,which was 6yrs before WW2, his writing is so good to see, but he was learning about Torpedo's mostly...lol....thanks so much for sharing.xx

Hi Jak,
this brought tears to my eyes. Absolutely brilliant,
and just proves how important making a memory album is.
Tfs
Sandra M

I love the scrapbook page Jak, its such a lovely memory, Thank you for sharing your Dad's Log Book, its not until your loveones are not around anymore, how precious these finds are, when you want to ask questions. These will be so good for young Jack when he does his projects at school he will be able to share the memories and pass on to others.

Such a wonderful find and such neat handwriting too. Hugs, Amanda x

These things need to be treasured as it is part of who loved ones are and of great interest. A lot of youngsters of today would bin that but it is our heritage and of how things were. The hard graft that people had to do to earn a crust, great find

A fantastic find by your mum and thank you for sharing it with us, great picture of your dad too.

Ooo Jak,what a wonderful find.Thank you for sharing this with us.I remember very well when your dad passed away,it was the same time I lost mine.Your words of comfort were so kind I love what you`ve done with your scrapbook page,a wonderful memory to pass down to little Jack.Such precious memories.
Take care.

This is fabulous Jak, and what a fabulous keepsake. Love the layout and the photograph.

Thanks for sharing this wonderful find with us, Jak. Some thins money just cannot buy. Beautiful scrapbook page.

What an amazing find! Isn't it interesting the little traits we carry with us! Wonderful and loving layout!

Hi as one who has been doing her family tree for the last 20 odd years this is an amazing find to hand down the family. This is the first time I've been able to look at this part about your Dad, you won't remember but I lost my Dad in June of the same year, it's still hard I miss him so much. The thing I have to keep thinking though is what my Mum said "we are sad for us, but happy for Da as he is no longer in pain" people say it gets easier with time it's not really true we till miss them just as much , it's just easier to control our emotions. It's strange but my Dad liked his flutter on the horses too, mainly just small bets, we were amused and laughed when we saw where the funeral parlour was, right next door to a betting shop, we had put a betting slip in Dads pocket with £3 to collect. On the day of the funeral for some reason my son flicked through the racing section of the paper, and found a perfect named horse, the odds were rubbish but we knew we had to put some money on so off we went to the bookies hadn't a clue what to do but when I said who I was and didn't know anything but the name of the horse the girl put it on for us we only putt a small amount on, after the funeral we found out 'sunshine Tommy' had won, Dads named was Thomas/Tommy so we think it was Dad riding the horse that day lol xxxAnnxxx