I love frosted colours for Christmas, it makes such a change from the traditional colours.

The image I’m using today is called Sticky from Mo’s Digital Pencil. Coloured with Copic Sketch Markers mainly the BG colours then used frosted stickles by ranger to add some sparkle here and there. 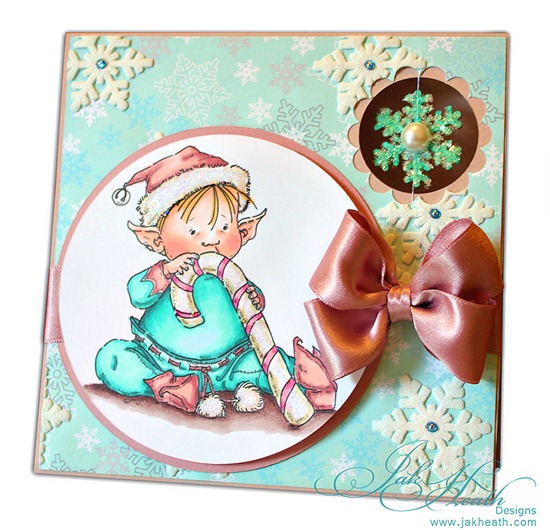 I found this pretty designer paper while I was away but the perferation name strip at the bottom of the 12 x 12 scrapbook paper was missing so I haven’t a clue whick company made it but it has embossed puffed up snowflakes on it which have a bit of frosted glitter over them. I added some pearls to the centers. I used paper punches to cut out the circles from the paper and base card and added a snowflake in the gap using thread so that it will spin.

Close up view of Sticky 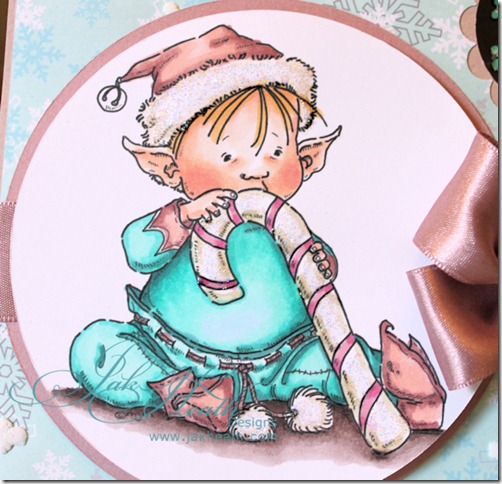 Gorgeous card Jak and love how you have set it out. Really like the colours you have used and your blending is fabulous. Love the bow too.

This is gorgeous Jak love the image.xxx

Dear Santa: All I want for Christmas is the skill to color like Jak. I've been a very, very good girl this year. Well, okay, only 1 very!

Awww, this is sooo cute x

Beautiful work.
Visit me too.
Greetings from Brazil

Beautiful card and such a sweet image. Love the paper!

Oh I adore the colours you have used on this beautiful card Jak....such a cute image and fabulous colouring and I love the backing paper too. Also love how you've added the snowflake.

Wonderful and awesome work. I really impressed with his stick. Your coloring is phenomenal. I noticed one thing in your blog that, each and every color work is very perfect.

Wow, Jak - this is stunning!! Fabulous colouring and I love the papers!! Juliexx